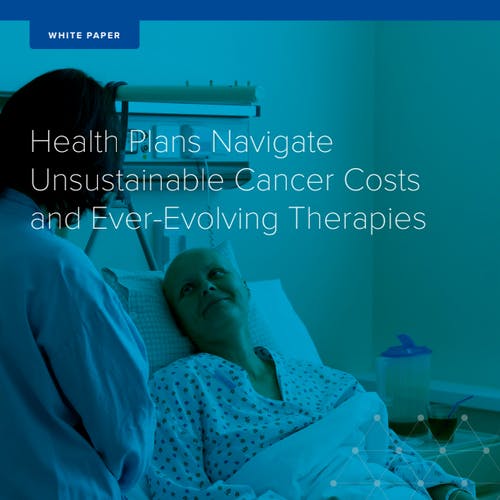 This white paper represents the views of the author, not America’s Health Insurance Plans (AHIP). The publication, distribution or posting of this white paper by AHIP does not constitute a guaranty of any product or service by AHIP.

THE RISING COST OF CANCER

The burden of cancer is heavy on patients, providers, and payers. Nearly 40 percent of men and women will be diagnosed with cancer at some point during their lifetimes.

It's one of the leading causes of death in the United States, and the direct and indirect costs of cancer are staggering. The National Cancer Institute estimates that cancer-related direct medical costs in the United States were $183 billion in 2015 and projected to increase to $246 billion by 20302, a 34% increase based on population growth and aging. The projection is likely an underestimate because of the increasing cost of medications to treat cancer, with the list price for many cancer drugs exceeding $100,000 annually.

As drug prices rise and the overall expense of cancer care increases, unnecessary or inappropriate cancer therapy has never been more costly

In this paper, we outline new ways payers can reduce and manage the costs of cancer while driving positive outcomes for their members, their provider network, and their business processes to ultimately enable the highest standard of evidence-based care..