DISCERN™ Test Informs Definitive Diagnosis of Alzheimer’s Disease and Degenerative Pathologies vs. Other Forms of Dementia 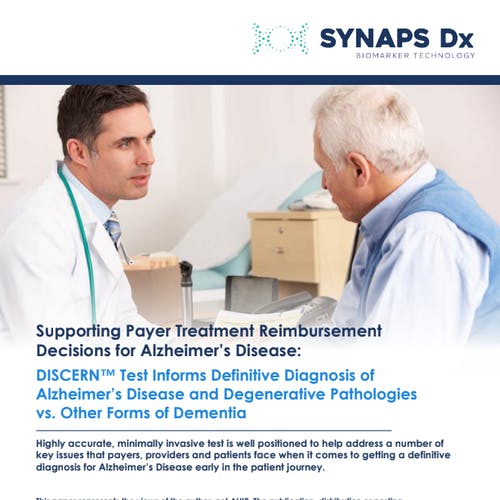 This white paper represents the views of the author, not America’s Health Insurance Plans (AHIP). The publication, distribution or posting of this white paper by AHIP does not constitute a guaranty of any product or service by AHIP.

Many people live with the assumption that dementia is a natural part of the aging process without concern for a definitive diagnosis. This perception is fueled by the unreliability of current diagnostic techniques and the drain on time-consuming, expensive resources. However, as new treatments for dementia emerge, the race is on to find a simple, definitive way to distinguish Alzheimer’s disease (AD) from other neurodegenerative conditions.

An estimated 5.8 million Americans aged 65 and older are living with AD. In 2020, AD and other dementias cost the nation $305 billion, including $206 billion in Medicare and Medicaid payments. Although AD is the most common type of dementia, there are many other kinds, including multiple strokes, Parkinson’s disease, Lewy body dementia, Huntington’s disease and B12 deficiency.

An early diagnosis of AD can help determine if a patient’s symptoms are truly due to AD or some other conditions that can be curable, such as Lyme disease, infections, emotional distress or nutritional deficiencies, such as a vitamin B12 deficiency. But when it comes to diagnostic tests, considerable confusion exists in the marketplace, with many claims being made, even as demand among all stakeholders is heating up in response to the introduction of drugs to treat AD.